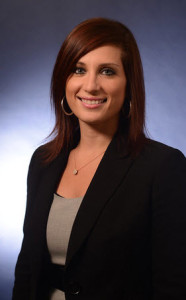 Patricia grew up in Wadsworth, Illinois where she attended Warren Township High School. During her four years there she was on the Girls’ Varsity Tennis Team and Girls’ Varsity Track Team. In addition, Patricia also balanced going to Greek School to learn about her culture and to maintain her second language of Greek. She graduated from Warren in 2004 and continued her education at Roosevelt University in Chicago.

While at Roosevelt, Patricia became the Co-Founder and Vice President of Alpha Sigma Alpha which became nationally known as Alpha Gamma Delta. Patricia also served as President of the Student Government Association while completing her Bachelors of Science in Political Science and also obtaining her Paralegal Certificate before graduating in 2008.

After college, Patricia enrolled into Western Michigan University, Thomas M. Cooley School of Law in Grand Rapids, Michigan. While in law school, Patricia was an active member of the Women’s Lawyer Association and volunteered at the Dispute Resolution Center of Western Michigan where she learned the true art of negotiation, ranging from civil to criminal matters.   Patricia also spent some of her free time volunteering for the Judge Advocate General by educating soldiers on their legal rights.

Patricia completed her last semester of law school as a full-time 7-11intern at the Lake County State’s Attorney Office in Waukegan, Illinois. During her time there Patricia represented the State of Illinois in a variety of hearings and trials including DUls, drug possession, batteries, trespassing, felony traffic and a burglary felony case. This is where Patricia gained valuable experience in not only preparing and conducting trials but selecting juries for week long jury trials.

After earning her Juris Doctorate and getting admitted into the Illinois State Bar in 2012, Patricia spent some time in civil work, doing personal injury and mortgage foreclosure defense,  before beginning her first job as a criminal defense attorney with the Will County Public Defender’s Office in 2013.  Patricia spent a year and a half defending her clients in the misdemeanor division. Patricia gained her passion for defending the rights of her clients through not just trials and hearings but taking the time to meet with them and understand their side to the story.

Patricia loves to travel, especially to visit her extended family in Greece but spends her free time here running and partaking in races. She has last completed a half marathon. Patricia recently became a Will County resident and resides in Shorewood, IL.